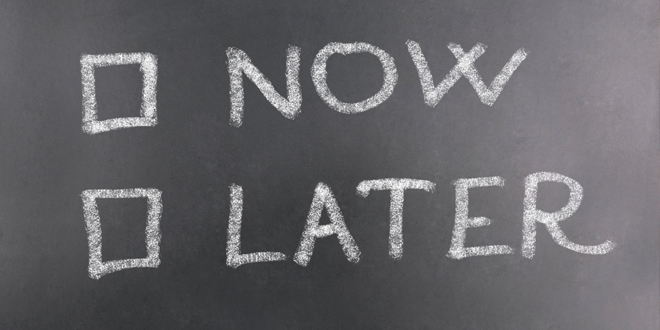 There comes a time when you just don’t feel like working anymore. It happens to everyone. You are certainly not an exception. Rather, it would be surprising if you haven’t felt that way about any of your past tasks or projects.. As an entrepreneur, you would have worked hard to get your business to a level where it is successful and stable. Yet, procrastination can tempt you at any time—particularly if it is a task you don’t like doing.

The general perception among businesspeople is that procrastination is bad. They expect their employees to be productive throughout the year, not wasting even a single minute while they are at work. However, there is a limit to how much work a person can do in one sitting without getting bored or tired. If he/she has reached their tipping point, continuing to work beyond that time would actually lead to a dip in performance quality and prove to be counterproductive.

For you, however, procrastinating is not a very good idea if you really want to excel. Let’s say you have an important decision to make regarding the expansion of your business premises. Procrastination can strike at any time, so you aren’t immune to it. You could feel a strong urge to put your feet up on the table instead of exhausting your mental energy on all the various decisions that come with expansion.

The bottom-line is that you have to decide when to procrastinate. If you get the timing right, you would ensure that your time at work remains productive, and you can make decisions which would help grow your business. On the other hand, if you have something urgent or extremely important to do, put off procrastination for a change.

Even if you have convinced yourself that your time is better spent working, there is a chance you could fall into the procrastination dilemma. You badly need to take a break but an important task is staring you in the face. In such a situation, you need to make a decision quickly to avoid wasting time. Ironically, procrastination can be called a fancy term for time wasting. Yet, you can waste much more time debating whether you should procrastinate or not.

So, how do you avoid falling into the trap? Below are five practical tips that can help you  pass on procrastination, or at least procrastinate on less important things.

1. Do the Hardest Work First

This is perhaps the best tip for avoiding procrastination. The urge to procrastinate is at its peak when you are faced with something difficult and time-consuming. To counter the threat, start off with the hardest work first thing in the morning. Get that out of the way when your mind and body are fresh and well-rested. Complete those high-payoff activities first so you feel good throughout the day and can knock out even more than you thought possible. Chances are you would have completed the tasks before you feel the need to procrastinate, which you can do later!

The general practice followed by entrepreneurs is contrary to the first step mentioned. Most of them try to get the easier things done first. What they don’t realize is that the important tasks are inherently associated with greater revenue generation. By going for the easier tasks first, you are actually avoiding revenue generation. Instead, you should focus on the toughest tasks first. Get them out of the way, and then tackle the easier tasks during the ‘non-prime time’ when you don’t feel like you are at your peak energy.

Procrastination is most likely to attack you when you’re tired. This is why it is recommended that you start working as soon as you get to the office because that is when you’re at your freshest. Make up a list of the work which needs to be done, placing the most important high-payoff and revenue-generating tasks at the top. That way, you can do the harder work in the morning and the easy work later on, hence no exertion which means no urge to procrastinate.

You might be surprised to read this one. There is a misconception regarding the assertion that procrastination is the same as taking breaks. This is not the case at all. Taking a break means you have ‘stopped’ working for a while. Procrastination, on the contrary, means that you are doing avoidance activities. It is when you don’t take a periodically-needed break that your mind drifts towards procrastination. A break could be something simple like walking around the block, going up and down the stairs a few times, doing 100 sit-ups, or 50 push-ups, etc.

Procrastination isn’t going to get you anywhere, but resisting the temptation to procrastinate can take you places. To put it simply, procrastination can be a roadblock to the success and growth of your business. Whenever you feel the urge to do something other than work, just think about the success you can achieve if you completed the task you have planned for yourself.

There are different factors that can compel an entrepreneur to procrastinate. While the tips listed here are effective, you have to use them in a way that suits your work habits. Otherwise, you’ll have a hard time avoiding procrastination. So, work towards putting off any thoughts of procrastination all day, and take your business to the next level.

Anne M. Bachrach is known as The Accountability Coach™. She has 23 years of experience training and coaching. The objective is to work less, make more money, and have a more balanced life. Anne is the author of the books Excuses Don’t Count; Results Rule! and Live Life with No Regrets; How the Choices We Make Impact Our Lives. Go to http://www.accountabilitycoach.com/Achieve.Your.Goals.Free.Gifts.Now/ and get 3 FREE gifts including a special report on 10 Power Tips for Getting Focused, Organized, and Achieving Your Goals Now. Join the FREE Silver Inner Circle Membership today and receive 10% off on all products and services, in addition to having access to assessments and resources to help you achieve your goals so you can experience a more balanced and successful life (http://www.accountabilitycoach.com/coaching-store/inner-circle-store/).
Previous Long-term care insurance rates bill clears House
Next Walmart is entering the auto insurance business in its latest move to offer affordable financial services to customers.