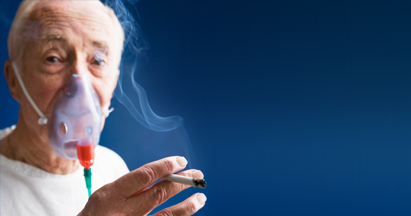 Life and DI insurers have been using “nicotine” tests routinely for over a quarter century. Nevertheless, there continues to be frequent issues between producers, their clients, and underwriters regarding test results. Researching a lecture on anti-selection and fraud, I took a peek at what is out there about these tests on producer blogs. What I found makes this a high priority article.

The hands-down most bizarre blog assertion held that the reason nicotine is detected in the urine is because this chemical is stored in the skin of the male organ. Hopefully, this was meant to be tongue-in-cheek! Are these actually nicotine tests? No, they are cotinine tests.

Cotinine is the major byproduct when nicotine is metabolized. The reason we test for cotinine is that it stays in the body longer than nicotine. How long after the last use of tobacco can cotinine be detected?

It depends on a number of factors including mode and volume of nicotine consumption, state of hydration, etc. As a rule of thumb, we should be able to find cotinine in the body fluids of typical cigarette smokers for at least 72 hours after their last puff.

Do insurers test for cotinine in blood specimens? No. They could, of course, but urine and oral fluid specimens are already mandated on virtually all cases requiring a blood profile, so this would be a redundant expense.

Is cotinine detected in persons who use tobacco in forms other than cigarettes? Absolutely.

Oral tobacco users—especially those that use moist snuff—and non-inhaling cigar smokers are less likely to test positive than cigarette, pipe, and water pipe (hookah, narghile) aficionados. Water pipe smoking is becoming fashionable in certain circles and these unfortunates cling to the myth that it’s “safer” than cigarette smoking. Just the opposite is properly true, given their typical volume of consumption! Moist snuff use, on the other hand, has not been shown to cause significant extra mortality in persons who are lifetime cigarette abstainers. This explains why a few carriers will issue at least some smokeless users at non-tobacco rates.

Is cotinine found solely in tobacco? No. Using any form of so-called nicotine replacement therapy (patch, gum, E-cigarette, etc.) will always lead to some quantity of cotinine in urine and oral fluid. However, at the detection threshold we use for underwriting purposes, this is a “hit or miss” proposition, and some will test negative based on our criteria.

Nicotine is also found in certain foods such as tomatoes. But one would need to consume enough to assuage the appetite of a brontosaurus before sufficient levels of cotinine showed up. Is there any reliable correlation between the amount of cotinine in a urine or oral fluid specimen and the quantity of tobacco/nicotine consumed? No. This qualifies as an “old wives’” tale.

The amount of cotinine in a specimen bears no consistent relationship to consumption levels. In fact, there are false negative cotinine tests wherein the applicant, despite a pattern of robust daily cigarette use, has a negative test on a given occasion.

Rather than facilitate anti-selection, I won’t say anything further regarding the ways in which false negatives are most apt to occur! Does passive smoking (exposure to second-hand smoke) cause a positive cotinine test? Yes and no, but not in terms of our criteria. It is impossible for anyone exposed to environmental tobacco smoke to have a positive cotinine test in an insurance screening context.

Since this is the No. 1 excuse proffered by producers when a client suffers from transient “smoker’s amnesia,” one point needs to be emphasized: Don’t even bother bringing this up! Is cotinine found in tobacco ashes? Since this has come up in ham-handed attempts to lie about smoking, we might as well put the notion to rest.

Trace amounts of nicotine can be found in tobacco ashes. Nicotine is transformed into cotinine in the human body, so one would need to eat an enormous pile of cigarette ashes to test positive. Such an individual would likely be at worse risk than a garden-variety smoker! Is it possible to have a genuinely “false positive” cotinine test (defined as a positive urine or oral fluid test in someone who has not consumed tobacco or nicotine in any form)?

Two insurance labs say they have used specialized confirmatory testing in alleged cases and found the rare one where it appeared was a real “false positive.” The other, larger lab maintains that this does not happen. After reviewing the data in support of this statement, I have to agree with them. If a client tests positive, tobacco/nicotine use is at least 99.99 percent certain.

How often do applicants lie about tobacco use? Industry wide, 7 percent to 20 percent or more of the positive cotinine tests occur in persons disavowing all forms of tobacco/nicotine use. Some are low-consumption or occasional smokers who don’t think they should pay the same extra charge as heavy/daily users. Others are oral tobacco, cigar, pipe or water pipe users who hold similar beliefs. Nevertheless, the majority appears to be typical cigarette indulgers whose intent is to deceive.

Hank George, FALU, CLU, FLMI is an underwriting educator/consultant and diehard Cheesehead. He has lectured twice on the main platform of the MDRT. His new book, Underwriting: What Every Producer Must Know, is available at Amazon.com. Hank can be reached at hankgeorge@aol.com.
Previous Frosty Gets Caught . . .
Next Overcoming a “Sales Slump”