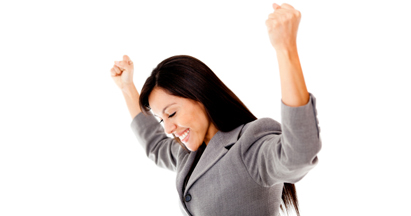 Persistence is to success as excuses are to failure. Never, never give up—there is always a way.

Jim Rohn said, “If you want something, you’ll find a way. If you don’t, you’ll find an excuse.” And he should know. A college drop-out, in a rut, in debt and unable to see his way out by his mid-twenties, Jim set out to achieve more. And he did. His persistence paid off and by age 31, he was a millionaire.

If you want more, you WILL find a way, because there is always a way. With persistence and consistent action, you will make it happen. If you don’t believe me, keep reading.

Allyson Felix made it to the Olympics in just over one year. With an intense training schedule of five to six hours per day, her persistence paid off. By the end of her training season in 2003, she had broken many records, including one set by Olympic Gold Medalist, Marion Jones. At the 2004 Olympics, she won the Silver Medal by running a 22.18 in the 200-meter race. Amazingly, she did all of this while being a high school senior and a freshman college student.

Persistence always pays off—and sometimes big time! It’s a known fact that more business deals are inked when one of the parties is persistent. Now, being persistent is not the same as being pushy; rather, it is voicing your ideal fit and expertise to someone that may not be aware of the benefits they will receive working with you. They will appreciate your persistence and the benefits—but you have to make them known.

At one point, J.K. Rowling, the author of the Harry Potter book series, was on welfare and so broke that she wrote her story on pub napkins. She could have easily given up on writing, but she was persistent in her passion. She finished the first Harry Potter novel, found a literary agent and went to work marketing her book. Today, she is one of the wealthiest women in the world with a net worth of about $1 billion dollars.

Persistence takes action. Complete at least three actions every day that support goal achievement. If you need funding for your venture, then get on the phone and find an investor. If you want to lose weight, then eat well and exercise. If you want a new job, then take steps to make yourself a prime job candidate for the right company.  Consistent action and persistence pay off.

If you believe in what you’re doing, just keep showing up. You never know when your breakthrough opportunity will appear, so bring your best to every situation. When the right opportunity appears, you’ll be ready!

Don’t get emotional about the obstacles in front of you. Remember, there is always a way, and your success is inevitable. You just have to figure out how to move over, around or under your challenges.

Don’t take rejections personally; they are nothing more than the natural process of weeding out the subprime opportunities. You’re on the road to success and want to put your energies toward something that will be ideal for all parties involved—including you. The right opportunity will be met with an enthusiastic, “Yes!”

It’s easier to be persistent when you can see how far you’ve come. Track your progress and achievements so you can see how much closer you’re getting with every step forward.

Kevin Bruce shared this story about persistence paying off for him:

“An example that persistence pays off… I sent a book to a friend of a client on 2/1/2009. I have called them regularly and never received any feedback, return phone call, etc. Yesterday, on their 40+ call (I stopped counting), I received a very warm answer from the wife, scheduled the Phone Consultation for Wednesday, 8/22/12, and got a call from the husband a few minutes later excited with some questions. Never would’ve expected it, but glad I kept calling!”

Every action of every day between now and your goal-achievement counts. Take action, bring your best, find solutions to your obstacles and say “next” to your rejections.  Feel good about how far you’ve come and be persistent until you achieve your goals! It’s a great time to be a Financial Advisor!

“History has demonstrated that the most notable winners usually encountered heartbreaking obstacles before they triumphed.  They won because they refused to become discouraged by their defeats.”

Anne M. Bachrach is known as The Accountability Coach™. She has 23 years of experience training and coaching. The objective is to work less, make more money, and have a more balanced life. Anne is the author of the books Excuses Don’t Count; Results Rule! and Live Life with No Regrets; How the Choices We Make Impact Our Lives. Go to http://www.accountabilitycoach.com/Achieve.Your.Goals.Free.Gifts.Now/ and get 3 FREE gifts including a special report on 10 Power Tips for Getting Focused, Organized, and Achieving Your Goals Now. Join the FREE Silver Inner Circle Membership today and receive 10% off on all products and services, in addition to having access to assessments and resources to help you achieve your goals so you can experience a more balanced and successful life (http://www.accountabilitycoach.com/coaching-store/inner-circle-store/).
Previous 10 Reasons Annuities Make Sense for a Portion of a Retirement Plan
Next A More Powerful Way to Look at Referrals