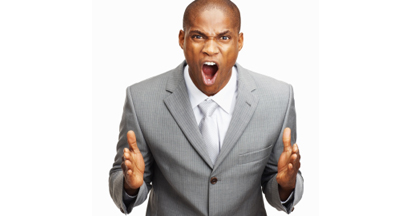 Getting Angry Doesn’t Benefit Anyone

Everybody gets angry sometimes, and as an old green friend once said, “You wouldn’t like me when I’m angry.”  Most people are not “likable” when they are upset because anger is a strong and defensive emotion, one that is defined as “an aroused state toward someone or something perceived to be the source of an aversive event.”  When we sense that someone else is angry, this immediately creates uneasy feelings, since we do not wish to be the source of that agitation.  Of course, anger is not merely directed towards other people; oftentimes, places, things, situations and other intangible properties can be a source of great anger.  Some people are angry with their government or the politics that permeate their office of work.  Some people are angry with lawmakers, while others are angry at how the criminal element appears to prosper at times.  There are plenty of things in this world that can make us angry at any given moment in time.

A 1976 film entitled Network had a famous scene that involved a newscaster telling his audience that it was okay to “get mad.”  In fact, he encouraged his viewers to get mad and to yell their frustrations outside the living room window.  This illustrates a good point.  When you are angry, it’s never a good idea to bottle up that strong emotion inside.  This could lead to festering resentment over a period of time, and in the end, could cause an ordinarily calm person to become filled with rage.  On the other hand, you don’t really want to take your anger out on others as that typically doesn’t produce the result you want.

The Harmful Effects of Being Angry

Allowing yourself to become doesn’t necessarily solve problems. In fact, it’s no coincidence that people who are known to be constantly angry are also the ones that have problems with their heart or with high blood pressure. Why is anger linked to heart disease? It has been observed that anger actually reduces the capacity of the heart to pump blood. Over an extended period of time, this can wear down the heart muscles and cause medical problems.

While it is best to express your anger, constantly becoming agitated can be very unhealthy.  Recurring anger has also been linked to chest pains, headaches, migraines, stroke, kidney failure, obesity, skin wrinkles and ulcers.  Sometimes we can avoid these negative and unhealthy reactions if we choose not to let some things anger us anymore.

If you feel that someone or something is becoming distressing or even injurious to you, the first reaction is to get angry.  As stated, do not deny yourself the right to become angry.  You have the right to become angry with a person that has done you wrong, especially if he or she has shown no remorse over their actions.  What is important though is that you are able to make peace with that person, to forgive them and to forgive yourself.  Why should you forgive someone that has offended you?

There are many reasons to forgive, on a moral basis, as well as on a personal level.  You must be willing to forgive others and yourself for your own actions, because this will make your life more enjoyable.  Life is too short to become obsessed with vengeance and deep-rooted animosity.  You could liken the idea of “never forgiving” to letting someone repeatedly stab you in the back with a knife.  It hurts when someone betrays your confidence, like a sharp stab.  However, when you cling to those painful memories every day, you are just reinserting the knife into that sensitive wound.  Whether or not you choose to resume the relationship with the offender is up to you; but it is imperative that you forgive that person at least in the sense of letting go of that heavy ball of negativity that is slowly developing in your heart.

Anger Management in Your Personal and Professional Life

Not only must you learn to control your anger in view of your own health, you will also be expected to exercise proper anger management appropriately by your friends and professional colleagues.  This can be tricky, because if you are prone to temper tantrums or impulsive behavior, you will be perceived as an unstable personality.  If you are known for having a bad temper at work, don’t expect to get a lot of opportunities for advancement.  The more responsibility you are given the more maturity you are expected to show.  On the other hand, if you handle anger so well that you don’t even express your feelings, you may be perceived as a bit of a push over.  Basically, you have to give people what they want to see.  If you are interested in appearing assertive and responsible, then try not to let others slight you without a discussion.  This doesn’t require that you be “mad”, but you can certainly share your opinion on the matter.

Balancing your anger, as well understanding how others perceive you is all a part of learning anger management.  If you want to control your anger in healthy ways and progress in your career, then begin today to choose to react differently to situations that normally would have made you angry.  Make different choices and keep yourself as healthy as possible. Learn to control your anger and choose to handle situations in a new and more positive manner.

Anne M. Bachrach is known as The Accountability Coach™. She has 23 years of experience training and coaching. The objective is to work less, make more money, and have a more balanced life. Anne is the author of the books Excuses Don’t Count; Results Rule! and Live Life with No Regrets; How the Choices We Make Impact Our Lives. Go to http://www.accountabilitycoach.com/Achieve.Your.Goals.Free.Gifts.Now/ and get 3 FREE gifts including a special report on 10 Power Tips for Getting Focused, Organized, and Achieving Your Goals Now. Join the FREE Silver Inner Circle Membership today and receive 10% off on all products and services, in addition to having access to assessments and resources to help you achieve your goals so you can experience a more balanced and successful life (http://www.accountabilitycoach.com/coaching-store/inner-circle-store/).
Previous Building Trust with Your Website Visitors
Next Growing Your Business with Dental and Vision Plans