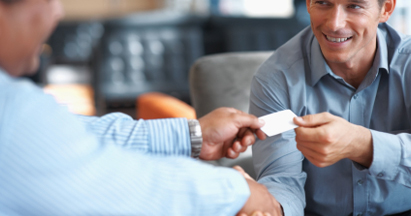 Become a “Resource Center” and Reap the Referrals!

One of the key strategies I teach in my Referral Advantage Program™ is to present yourself as a resource to people – to give referrals to prospects and clients as early and as often as you can. You want to position yourself as someone who is well-connected and willing to help others with your network of contacts. When you’re a strong referral giver, the law of reciprocity kicks in. The more you give, the more people will give back to you. Sometimes, what you get back is significantly more than what you gave in the first place.

I met one rep in the Washington, DC area who uses his “Nanny Network” as a way to serve first, do business second. Since he has a nanny for his children, he’s become well-connected with other nannies and he understands how the business works. He’s created a reputation for himself in this area and uses it to his advantage. And, as you might imagine, most families that can afford nannies are usually clients with more financial resources.

What a Top Producer Does

A few months ago I had the pleasure of dining with Sam Henry. Sam is a top producer. Year in and year out, he’s at the top of his branch and is one of the top producers in his company. Sam told me an inspiring story that perfectly illustrates this principle of becoming a resource to your clients.

Sam had made the acquaintance of a successful gentleman (we’ll call him Mr. Smith) at a community function, but was never able to do any business with him. Sam also knew this gentleman’s son. When the son started his own business (to get out of the shadow of his father), Sam gave him several referrals to prospective clients. One of those referrals turned into the son’s largest client to date.

A short while later, Sam received a call from Smith, Sr. He said to Sam, “I understand you’ve been very kind to my son. I’ve recently sold my business for a substantial sum of money. I’d like you to help me with some of this money.  Are you interested?”

Two weeks later, Sam brought in $1.4 million under management.  A few months later Sam helped Mr. Smith set up a gifting program to his four children.  Mr. Smith asked Sam to help his children with their investments.  All this, just because he gave some referrals to Smith, Jr.  Just because he presents himself as a “resource center” and follows up with action.

I suggest you position yourself in this way by telling your prospects on your first appointment, “My goal is to be a resource for you. I want to be here to serve you even when I have nothing to sell to you.” This will make you stand head and shoulders above the pack.

1.  Get permission for people to be proactive when contacting a new prospect.

2.  Pre-sell the prospect on who will be calling (if appropriate).

3.  Call both parties in a few days to make sure the connection has been made.

4.  Check in after the work has been done to make sure everyone had a good

Golden Rule of Referral Giving: Give referrals unto others as you would have them given unto you.

When you give referrals in this way, a couple of things happen. First, you’re demonstrating the value of the referral process when handled well. Second, you’re modeling the best way to give a referral. When you take the time and energy to make a great connection, others will do the same for you.

Q: Frank Simpson, CFP, asks the coach: “In a seminar in our office you told us to “expect referrals.” Does this mean I should expect referrals from every client?

A: Yes and no. When you have a strong referral mindset, when you provide real value to prospects and clients, when you have a system in place to ask for referrals at the right time, you can then expect to get referrals from both prospects and clients. Going into any activity expecting a certain result, usually increases the chances of it happening. Your behavior changes just enough to bring about the results you desire.

With that said, you have to be realistic. Some people will not play the referral game. Just do your best to be referable and to stay in touch with clients. Sometimes clients will come around and play the game after you’ve stayed in touch with them over time. This is why you expect referrals to happen, but you’re not overly disappointed when they don’t.

When you keep referrals lively in all your relationships–without becoming obnoxious–you’ll tap into a ton of people who love to play the referral game, and who will help you build and sustain a substantial business.

Bill Cates is the President of Referral Coach International.  His trademarked Referral Advantage™ Program has been featured in such publications as Success Magazine, Entrepreneur Magazine, Selling Power and Research Magazine, and his own business success has been featured in Money Magazine. Bill is a regular contributing editor for many financial services publications. Visit his Web site at www.referralcoach.com. Bill Cates, author of “Get More Referrals Now!” and “Don’t Keep Me a Secret!” is offering you a free copy of his report “7 Deadly Referral Mistakes” as well as a subscription to his free referral newsletter with 30,000+ subscribers. (What do they know that you don’t?)  Go to www.ReferralMinute.com.  To contact Bill, send him an email at  Info@ReferralCoach.com or call (301) 497-2200.
Previous Solve the Mystery: What Is the “Right Amount” of Life Insurance?
Next Utilize the iPad to Boost Revenue with Three Simple Ideas