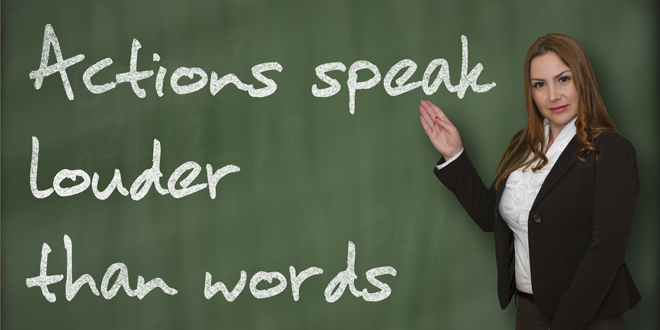 Americans spend more than $12 billion per year on the nation’s most pervasive addiction—self-help and the seemingly insatiable desire to be more successful. Like other compulsions, we can’t get enough to satisfy our longing.

Every couple of weeks, there’s a new self-help book, video or seminar. Malcolm Gladwell’s latest addition to his shelf of self-help books is totally enticing. It’s called David and Goliath: Underdogs, Misfits, and the Art of Battling Giants. How can anyone resist the appeal of getting to the next rung on the job ladder, of making the numbers every quarter, and of going from the bottom to the top?

If self-help were so effective, then tens of millions more of us would be the most engaged and highly motivated people in the world—smashing every performance record where we work. That’s not the case, to say the least.

The problem isn’t how we think or feel, but what we do. It’s the doing that makes the difference. Here are some action-based business ideas that get the right results:

1. Stop talking to ourselves. As individuals, it’s so easy for us to think we’re right. And it’s the same with companies, too. A recent cars.com TV commercial makes the point. When the “team” hears the new plan, everyone cheers—all except one guy, who says, “It’s a stupid plan.” In the next shot, he’s standing at the curb holding a box with his personal stuff.

Many companies, like individuals, become so enamored with their own ideas that they shut out other views. Amid the cheering, no one dares say, “That’s stupid.”

Ideas, plans, initiatives, campaigns and just about everything else benefit from diverse input.

2. Never stop improving. While this Lowe’s tagline has a clear double meaning for that home improvement company, the words apply to all businesses and employees. Many get to a certain point, plateau, and stop, as if they’ve gone far enough while a select few continue to improve.

This attitude takes the focus off what really matters: performance.

3. Avoid corporate narcissism. Facebook’s phenomenal success is no surprise, as a recent Boston University study, “Why do people use Facebook?” points out. It meets two basic human needs: the need to belong and the need for self-preservation.

Businesses aren’t much different as they’re always seeking opportunities to showcase themselves. However, it takes enormous willpower, discipline and skill for companies to keep the spotlight on their customers.

4. Get good at connecting the dots. Most people can describe what they do at work, but few can recognize opportunities, identify problems and come up with solutions that have a positive impact on the company. It’s the ability to connect the dots that separates average employees from those displaying superior performance.

5. Seek ownership opportunities. Workers come in two varieties, those who see themselves as employees and those who act as owners. There’s a surplus of the former and too few of the latter.

If there’s anything managers need and want from employees, it’s having them take ownership—taking charge of one’s job by controlling outcomes, meeting deadlines, overcoming hurdles and reaching goals.

With the current surge of self-help literature and the corresponding team spirit it champions throughout the business world, we might expect that the ownership would be thriving. Since that’s not the case, is it possible that this “team spirit” is either wishful thinking or window dressing … or both. Unless being a “team” member is wedded to ownership, it’s nothing more than an example of workplace jargon.

It’s worth thinking about because it’s dangerous. These are the customers who quietly disappear. No one misses them until they’re gone, and then we say, “I wonder what happened?”

“Active customer loyalty” is quite different. It results from constant cultivation, reinforcing how much we appreciate them, and continually looking for new ways to “refresh” their interest, feedback and loyalty. It’s worth the effort because losing customers is costly.

7. Don’t get suckered into doing something dumb. There are many valuable to learn lessons from the Obamacare website debacle. However, one towers above all others, and it is this: Never launch anything before it’s ready.

A CNET eBulletin evaluated entrants in the blossoming smartwatch category. Whether selling for $49.95 or $950, one word described them: clunky. It wasn’t the first time. Microsoft’s SPOT smartwatch was said to be “a bulky and poor design,” when it appeared in 2004. Needless to say, it went missing rather quickly.

It happens every time someone says, “We’ve got to get this out now or else.” Or else what? Or else we’ll look stupid, wrong, or embarrassed? Whether it’s a product, a plan, a project or anything else, getting it right is the only test that counts.

In business as in life, it takes the right ideas to drive the right results.

John Graham is the co-owner of GrahamComm, a marketing services and sales consulting firm specializing in the insurance field. The firm’s unique “Magnet Marketing” strategy is designed to attract and hold customers. His articles on marketing, sales and business trends can be found on his website, johnrgraham.com. His free monthly eBulletin, “No Nonsense Marketing and Sales,” is available at johnrgraham.com. Contact him at johnrg31@icloud.com.
Previous 101 Beneficiaries
Next Enhance Your Everyday Negotiating Techniques