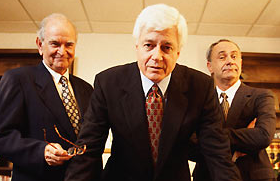 In the financial services sales world, the threat of a lawsuit is just part of the cost of doing business. Insurance agents and financial advisors expose themselves to the threat of a lawsuit almost every time they put pen to paper – and even the most dedicated and knowledgeable agent isn’t immune. Lawsuits typically arise out of miscommunications, which can happen to anyone. And even well-meaning clients can sometimes only hear what they want to hear. Part of being a financial professional is taking steps to deter unfounded lawsuits, and where lawsuits do occur, to take the steps necessary to mitigate their effects.

Unfortunately, lawsuits can bankrupt agents and even entire agencies, absent some kind of liability protection. In the insurance and financial services world, that means errors and omissions insurance, or E&O. This coverage provides an umbrella of protection for financial services agents accused of wrongdoing or negligence. Your E&O policy helps pay legal bill during the court fight, and can provide significant liability protection in the event you lose the case and are hit with a judgment.

For many agents, your E&O bill is invisible. That’s because the agency pays it for you – and the premiums can run as high as $3,000 per year – and even higher for some agents involved in high risk lines or in agencies which have been targeted for lawsuits themselves.

If you have been selling plain vanilla life insurance and fixed annuities for a captive agency, and have recently expanded your practice to include other carriers, or other lines such as health, take a look at your coverage. The E&O coverage you have from your main agency may not cover you for claims arising from a health insurance policy you sold from another carrier, for example. Even if you have E&O coverage, it may not protect you from claims made from policies you sold prior to when you were a customer. Check your policy carefully for “prior claims” coverage. This coverage is more expensive than a policy that doesn’t cover prior claims, all other things being equal – which is a great reason to purchase E&O coverage early in your career.

The Duty to Defend

Also, if you are shopping for an errors and omissions policy, look at the language of the policy. The clause you are looking for states that the insurance company has a “right and a duty to defend” you in the event of a claim. If the policy states that the insurance company has a right but not a duty to defend you in court, you could find yourself sold down the river: The insurance company could reach an out of court settlement to limit their potential loss on your case but may refuse to defend your reputation in court. At worst, that could lead to your hard-won reputation being ruined by a baseless claim. At best, that could mean you are on your own for the legal bills.

E&O is fairly loosely regulated, compared to other insurance lines. Underwriting criteria and premiums vary widely from carrier to carrier. If you are an independent or have your own agency, it pays to shop around and get offers from several different carriers. The act of shopping around could save you and your agency thousands per year.

Jason Van Steenwyk has been writing professionally about personal finance and investments since 1999. He first learned the trade as a staff reporter with Mutual Funds Magazine, part of the FORTUNE Group of magazines at Time, Inc. While there, he also served as managing editor of Investors’ Digest, a monthly compilation of the best in investment newsletter writing, published by the Institute for Econometric Research. He was also a contributing editor to Market Logic, Income Fund Outlook, Mutual Fund Buyers Guide and The Insiders. He holds a life and health license in Florida, (inactive). In addition to his work for Mutual Funds, Jason has published feature articles in many financial consumer and trade publications, including Wealth and Retirement Planner, Registered Representative, Annuity Selling Guide, Bankrate.com, Senior Market Advisor, MilitaryAuthority.com and and many more. Jason is a full-time freelance writer and editor, an avid guitarist and fiddle player. He currently receives no sales or production-based compensation from any insurance or financial services company. Jason lives in Fort Lauderdale, Florida.
Previous Annuities Are Still Safe
Next Bulletproof Your Practice: Lawsuit Defense 101